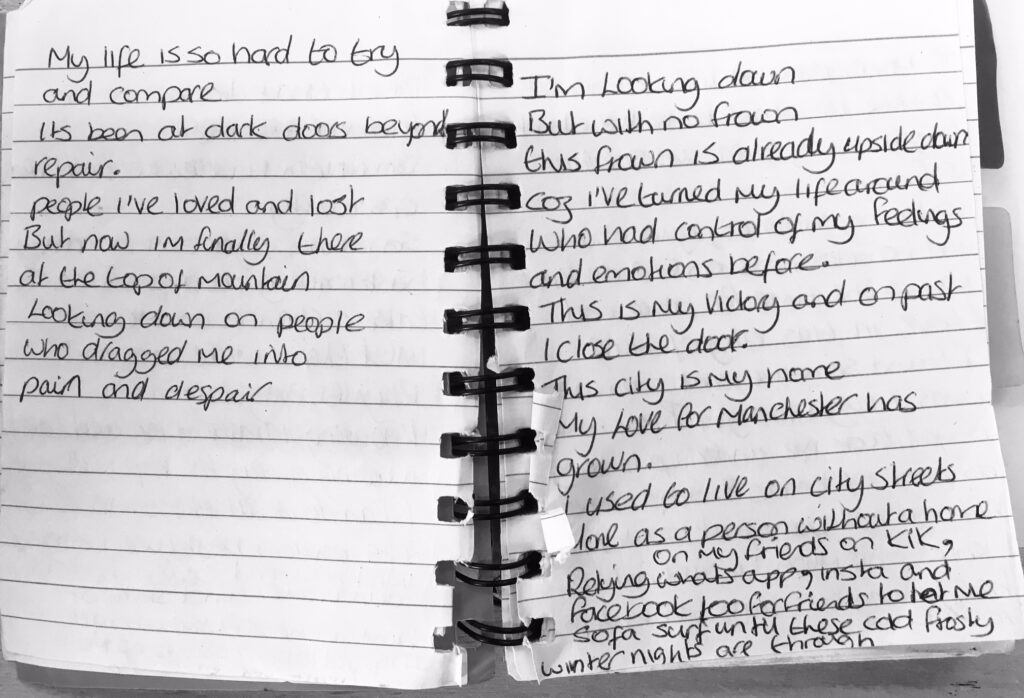 By Lucy, with Christine Johnson

Six and a half years. This is how long it took for Lucy to be re-homed after escaping domestic violence. “I started to be homeless March 2015. I didn’t get out of being homeless ’til Oct 2021. That’s the date I got handed my keys.” She shows me the rose tattoo with the date above it. “That’s always there to remind me of the experience I did go through and eventually made it out the other side, but I have friends I loved and lost who didn’t make it.”

Lucy didn’t emerge unscathed however and has PTSD due to harrowing experiences.

“There’s a lot of stress and strain you don’t see in everyday life that becomes your everyday life when you’re in the hostel system or dispersed housing placement or even I’ve slept in nightclubs, I’ve slept on the streets, abandoned warehouses…always by myself. My hobby was urban exploring before I became homeless so I knew quite a few buildings I could get into that I could stay warm and dry.”

Hostels aren’t always the safe haven you might expect.

“You can’t have anything nice in there. I tried to make friends, but there’s a lot of back stabbing, robbing each other. There were times I thought I was never getting out of this situation. You don’t know what’s going to happen one day to the next.”

I listen to Lucy recount childhood events through to adult homelessness. Without the sense of space and time separating each re-telling, the stories condense in my gut like the shock of being winded after a fall.

Since being re-homed Lucy sought out opportunities and makes the most of them. Perhaps her resourcefulness has been honed in response to precarious life circumstances from a young age.

She jumped straight into the Ravens project with gusto.

“My first week me and Kirsty came in singing, Matt (Hill) said: “I heard you and Kirsty harmonising and I’d like to put it on a track.” He looked at my notes & lyrics and said he wants to put them in the exhibition at Manchester Cathedral. I’ve gone from first week songwriting to putting vocals on a track. Who else can actually say that? It made me feel really good about myself. Matt told me: “you can sing, you’ve got a really soulful and unique voice.” “

“Learning guitar, songwriting and singing – my idea is to put it all together to create something myself. My main priority now is to raise awareness around homelessness and specifically women. When you’re homeless it’s not equal, women have just fallen completely off the radar. There’s not a lot of women speaking out. Newspapers aren’t picking up on the subject either.”

Lucy has a strong life force which permeates her physicality and speech and I believe it is what has kept her afloat and steered her through harsh life circumstances. Without physical, mental and emotional resilience it’s understandable why many homeless people succumb to the cocoon of drugs and alcohol, even suicide. The stories of all who have known homelessness and the difference in the world they encounter has value for everyone but for that value to be recognised maybe a change in consciousness is required.