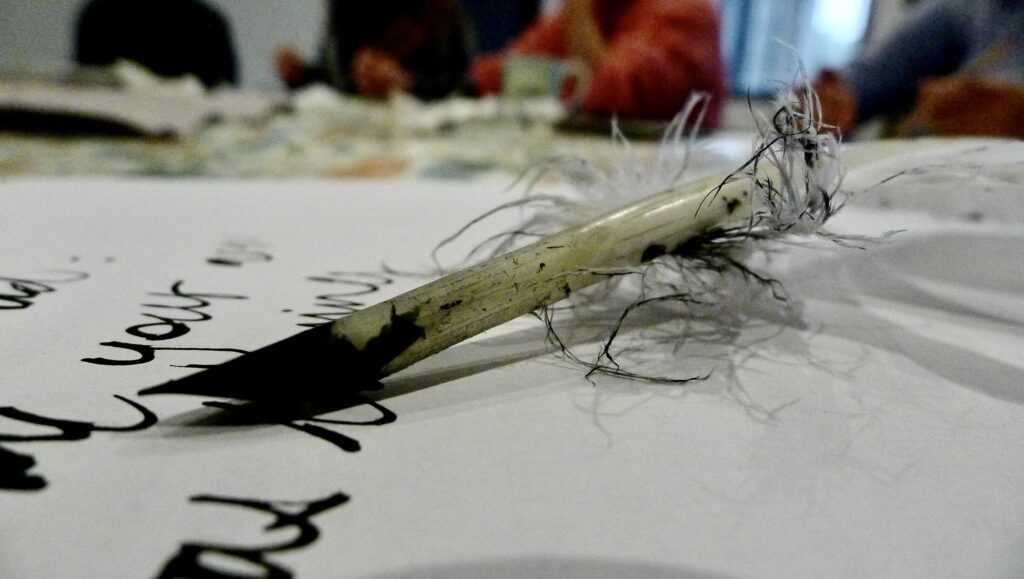 You don’t know how it’ll go, with the weather and poetry both being unpredictable. It’s simply a question of luck sometimes.

The plan was to walk up in Wordsworth’s hills with a group of people from Tom Harrison House. (An organisation that works with veterans, and some civilians, who have substance abuse issues.) But the rain came down hard and so we stayed inside, with quill pens and assorted writing implements.

The group have been working on a rewrite of Wordsworth‘s poem The Discharged Soldier. It’s a subject close to the heart, perhaps too close. It brings up an “issues“ around conflict, family, recovery.

The original poem is a mini-documentary about a meeting with a hungry man discharged from the army, so hungry and weak that he simply leans up against a tree, waiting for whatever fate throws his way. In our rewrite, the poem has become a strange fairytale: a sequence of meetings with the same soldier, each time leaning against a different tree. There is a sense that they are one but many, standing for the myriad lives lost in myriad wars.

As I tentatively read the new poem back to the group, worried that it might touch too many nerves, there’s delight at their achievement. They have brought between them something new into the world. And it’s the word “between” that is special here. Because this particular group have been through a certain kind of hell together. They faced their addictions, they’ve opened themselves up to change and they’ve helped one another through. They’ve become a team, the kind of team you join only a very few times in life. The kind of team in fact that gets you over the gap between life and death.

It’s this special connection, this special communication is almost telepathic.Working with them today is a great pleasure. At every turn they are kind, funny, supportive, playful with each other. There’s a gentleness for all the violence of their backgrounds. It’s a lesson in how to be with one another. I come away from this workshop feeling once again that I’ve learned at least as much I’ve passed onward.