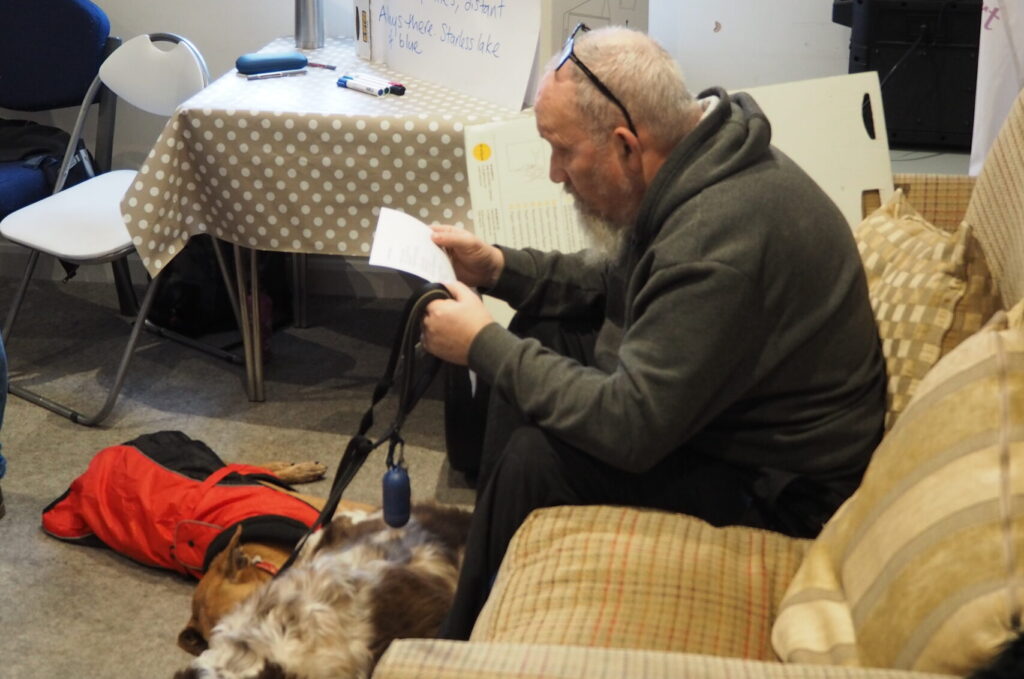 The first poem to arrive in my inbox was “As Pale As Roses Are”. Something within me stopped. Or rather it was the tendency to be distracted by many things that stopped. It hit me in the heart. I was inside the poem, walking with the poet, feeling his descriptions, the cleansing of nature, hope after grief and the joy of recognition between strangers.

Emotions move us, drive us on, inform our thoughts, direct our actions and behaviour. They are our first language. Poetry and music interpret these subtleties. They speak the same language. They are kin.

The poem says “listen to me” and the music responds, “I hear you, I feel you.” It is a direct response, without thought. That’s what makes it real. This is true intimacy.

I sang the poem spontaneously into my phone. And that’s it. That’s the tune. Another day, another time, another mood and the tune would have been different.

Music is emotion, and the naked human voice is the most exposing of instruments. Below there’s a link to the first performance we ever did of the song. Something about this rough and ready rehearsal still gives me goosebumps, because it feels so real. The group were whispering favourite lines from the poem, then spontaneously began to join me, singing the melody.

More poems arrived – ragged, edgy, shocking. Light hearted and spacious, flowing slow and deep. Each poem, whole in itself, excites a new interpretation, a new life. I bring my own reflections and emotion to each piece, and sometimes perhaps a new direction.

The poem, “Refugee From The Ravens” paints a bleak picture – “If you’re outside you drink, You drink if you want sleep”, ” Meth straightens me, Meth brings my morning norm”, – but the reader of the poem – Grahame – has a gentleness in his voice. What I heard from the poem was “please uplift me”. Or maybe it was my emotional musical response that wanted to uplift the poem? It’s like an unspoken communication between poem and music. So the melodies in this song are perhaps more upbeat than the words would suggest. But I still felt that as a song there was a call for some words of hope to shine in the darkness.

Phil suggested taking a few lines from another poem/song – “Years Of the Quiet Sun”, to weave a counter melody through Refugee. It seems to work.

Words are symbols and can perform a perfunctory role or when imbued with a poetic sensibility, capture the emotional essence of our experience. Music is even more direct, vibrating through us physically – and when poetry and music come together, it can be sublime.

How do words become a song? It’s mysterious, ineffable. I like it that way.