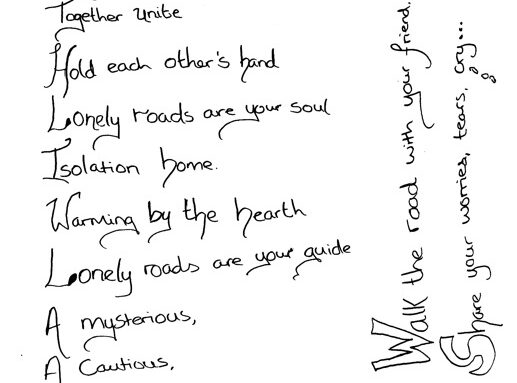 WALKING A LINE WITH WILLIAM AND DOROTHY WORDSWORTH: a workshop

It was wonderful to reprise this workshop material in the spectacular auditorium of the Liverpool Lighthouse as Phil Davenport and I worked with a group of writers from Tom Harrison House, just round the corner in Anfield, Liverpool.

The workshop was based on William’s composing process of walking whilst writing, and my theory that he used the path he had laid out in the gardens at Rydal Hall, not only as a place to walk whilst writing poetry, but as a way of measuring out the ten-syllable rhythmic line of blank (ie unrhymed) verse that was his common measure when not writing ballads. In the workshop we explored this measure by physically walking whilst reading lines by William, pacing out ten-syllable lines across the massive stage at Lighthouse. We then used this experience to start to write our own material that built on William’s poetry (the phrases we used were all to do with the act of walking as a form of change, of transformation) but which spoke to our own ideas, feelings and images. Finally, we all took a walk across the room whilst reciting our lines, creating the effect of a piece of choreography as well as a poetry performance.

As we gathered to reflect on and discuss our experiences, it was clear that people had responded very differently to the workshop. Astrid felt that she’d had to rev herself up to meet the challenge, but that it felt like ‘a little journey’, whilst Maxine felt ‘open and free. You can swing your arms around, move your head. You feel more than if you were just sat at a table, you can sense more.’ Richard spoke of the challenge of counting steps and matching them to syllables, yet feeling, like Maxine, that this was very different to setting at a desk and writing: ‘like a style of dancing’. Ian reflected on the way in which sitting at a desk felt safe and his pen would act as a kind of tool, or even a weapon, to keep people away, so this work felt exposing and well out of his comfort zone.

Matt felt that walking had been particularly important to get him into the right mindset for writing (something that he does in other situations too) but that afterwards it wasn’t as important. He thought that if he had realised at the beginning that he could’ve been freer with the delivery of the line, that would have changed his perspective. Astrid also reflected on how the act of writing in this way made her think differently about the material, especially after she saw me show a freer movement interpretation of a Wordsworth line. John felt that by the end he could see ways in which he could express himself in movement in a much more focused way rather than being too preoccupied on counting syllables. Paul also concurred with this and perhaps had the most success in his performance when breaking away from that structure and being freer with his gestures and timing – he spoke of it being a challenge, but ‘I needed a challenge’.

For myself I feel that this workshop reflected some lifelong issues of my own with struggling to learn how to count syllables in poetry and how to teach poetic rhythm in my work as a university lecturer. As a poet, I’ve always written free verse and find it easier to deploy rhythm in a less regular way. Maybe part of me still believes you have to learn the rules before you can break them, but what this workshop has shown is that it can help to see the wider scope of what is possible first, in order to develop a more flexible play between structure and something freer. This gives a key to something fundamental about the craft of poetry: as Richard was reflecting on how to turn in order to show the line break, Phil was reminded about the importance when swimming of how you turn when you reach the end of the swimming pool. This reminded me of the ancient meaning of the word ‘versus’ from which we get the word ‘verse’: it means the turn of the plough at the end of the field. Thus, the oldest sense of what a line of poetry is already an image of physical movement.

In conclusion, Harry reflected in quite a different way that the structure of presenting the writing as a kind of performance helped him to give focus to his words that he perhaps wouldn’t have found if he’d just been sitting at a table and indeed his very tightly constructed delivery confirmed this. I reflected that when poets wrote in these kind of forms in the past, it’s unlikely that they built their lines syllable by syllable but they were so used to writing in such measures, it became quite a natural way of shaping their poetry. Thus ended a really intriguing and enjoyable workshop from which I’ve learned a great deal.

Thanks to Ian McCarthy for organising on behalf of Tom Harrison House and Rebecca Ross-Williams for hosting us at Lighthouse.